Student Debt and the Future of College Organizing 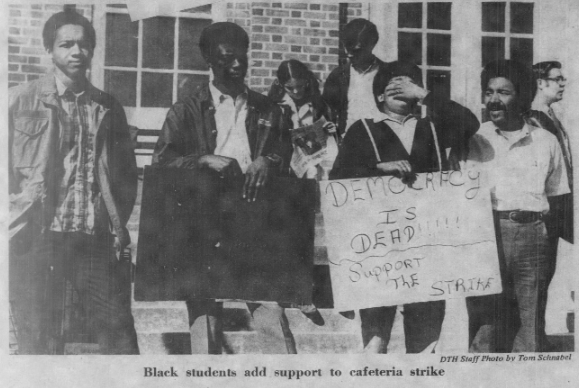 My political development began through college organizing. Through the Young Democratic Socialists of America (YDSA) chapter at Georgia Tech, I participated in and helped lead campaigns targeting issues like underfunded mental health services, privatized dining, and the rights of immigrant students. YDSA GT’s Housing Campaign quickly grew into the independent Home Park Tenant Union, which successfully organized local tenants, student and nonstudent alike, against corrupt and abusive landlords. Many YDSA members, including myself, participated in the formation of the campus’s chapter of United Campus Workers of Georgia. It was through our reading groups of Das Kapital that I was introduced to the basic principles of Marxist theory.

Many socialist organizers around the country have started their political development similarly, through campus activist campaigns where they learned the basic skills of relational organizing, along with the theoretical knowledge to understand their material conditions.

But it becomes very easy to slip into a mindset that treats the college campus as a microcosm of the community, where the campaigns and class relations present are fundamentally the same as those in the larger capitalist society. Indeed, American politics is seeing itself increasingly polarized around educational lines. And distinct from every previous socialist movement in history, DSA and the modern American left has found itself increasingly defined around college educated workers.

How did this happen? How does this display itself in the existing campaigns present in YDSA and DSA? And how can we find a way to overcome it?

The role of higher education in modern capitalism

The advent of globalization, and the growth of software-driven automation, has increasingly demanded a more professional and credentialed workforce. Of the six companies in the world with a trillion dollar market cap, 5 are in the software development sector (the sixth, Petrochina, is the publicly run oil company of the world’s largest country). The entry level pay for software engineers, similarly, instantly places these workers in the top percentiles of Americans.

Furthermore, to deal with the massive scale of global capital, a larger and more professionalized management class is needed. Lawyers, accountants, marketers, and managers are growing in demand, leading to an overeducated class of middlemen. Together, these jobs have formed what sociologists such as Barbara and John Ehrenreich have called the Professional Managerial Class. The Ehrenreichs note the recent trend of skilled workers increasingly turning to management options under the pressure of late neoliberalism:

“At its wealthier end, skilled professionals continue to jump ship for more lucrative posts in direct service to capital: Scientists give up their research to become ​“quants” on Wall Street; physicians can double their incomes by finding work as investment analysts for the finance industry or by setting up ​’concierge’ practices serving the wealthy.”

On the flip side, jobs where the qualifications are only a GED or trade school experience have seen a stagnation in pay. This in no small is part due to the declines in union membership, which once were a bedrock of the American middle class.

We see then that the college degree represents the gateway to acquiring the value generated by the booms in technology and global capitalism. College campuses, therefore, serve to regulate this special segment of the workforce. Given the high stakes around a college diploma, academic merit isn’t sufficient as a qualifier to regulate the massive demand. As such, American universities are nearly unique in the developed world with their steep costs to entry. And for those who manage to achieve a professional degree, the weight of student debt drives them to allocate their labor towards where the globalized economy steers it – high skilled jobs and management positions.

The Problem with Debt Relief Campaigns

Organizing under the COVID environment is a difficult task, particularly since lockdowns deprive people of their most powerful tools – face to face conversations. It’s no surprise then that YDSA GT saw a substantial slump in participation during the 2020-2021 academic year, despite membership remaining the same.

To address this problem, I and the others in leadership decided to start a campaign following the national organization’s push for Student Debt Relief. The setbacks that this campaign faced have been extensively detailed by my comrades. But beyond student debt relief being limited as an agitational demand, it also promotes a flawed political orientation where “students” are treated as a class that should advocate for their own exclusive interests.

Student Debt Relief would disproportionately benefit those already on track to being among the highest earners in society, exacerbating wealth inequality for an entire generation. While among educated workers, it also would disproportionately benefit those from poorer backgrounds, or in the most heavily exploited professional jobs such as teaching and nursing, this kind of policy still falls short of the universal demands we must make to unite workers across educational levels.

It also represents a step backwards from the focus of the 2016 Sanders campaign’s educational policy: tuition free public college for all.

Consider an Uber driver with just a GED or a community college background. Student Debt Relief would have minimal impact for her, but tuition-free college would offer a much easier path to escaping poverty.

The shift in focus in 2020, driven in part by bad faith criticisms by “progressive” rivals such as Elizabeth Warren and Kamala Harris, resulted in Sanders diminishing his support from a broad base across the working class to a more limited coalition of college educated leftists.

To be clear, student debt is a crucial issue for millions of people, and remains one of the means the capitalist class uses to control the professional workforce. The Biden administration’s reluctance to address it despite the wide range of executive leverage available is emblematic of the feckless governance of modern Democrats. Still, for an organization like DSA, our priorities should be universal campaigns that attract and agitate the largest segments of the working class.

Unlike student debt relief, ending tuition for public colleges would work to weaken the barrier between workers with and without a college degree. But more than this is needed if we want to close the gap and build long term solidarity.

Over 50 years ago, cafeteria workers at University of North Carolina went on strike. Occurring at the height of the civil rights movement, the strike spurred student activists to demonstrate in solidarity. Together, this resulted in a resounding victory, with food workers receiving higher wages and defending their right to unionize.

This year at Columbia University, student activists and graduate teaching assistants went on strike together, withholding both tuition and labor until better working conditions and pay were achieved.

These kinds of actions work to develop solidarity and class consciousness among student activists, allowing them to use their role in the university environment to force concessions towards campus workers.

If this approach helps bridge the barrier between students and workers within college campuses, what does it take at the national level?

YDSA right now is taking advantage of the surge in interest for socialism among younger Americans that has remained strong ever since Bernie Sanders announced his candidacy in 2015. But this surge calls for a broader strategy than focusing on the four-year universities that have traditionally incubated activist culture.

There are over 16 million trade school students across the country. Recruiting people who are training for these jobs should be a priority for YDSA. Jacob W articulated this case a year ago in YDSA’s official publication:

“There are about 680 people training to be nurses at UVa who we could be engaging with and recruiting from directly. In discussions with multiple future and current nurses within the University hospital system, I’ve found that many didn’t even know that nurses unions exist! We need a strategy that analyzes and realistically engages with real material conditions on campuses around the country; one that can introduce unionism and socialism to large numbers of future nurses and other workers.”

To appeal to students in schools outside the typical college environment and subculture, it’s essential to prioritize universal demands such as reduced or eliminated tuition, stronger labor rights, and healthcare for all. Otherwise, we risk the entrenchment of YDSA, and DSA as a whole, becoming a subculture of professional activists rather than a mass movement of the working class.

The 2021 Convention and the future of YDSA

The 2021 YDSA and DSA conventions saw significant political decisions that will affect the youth organization’s structure going forward. At the YDSA convention in June, delegates passed Resolution 2: Back to Class Struggle, pushing chapters to emphasize local demands such as “freezes or reductions on tuition and fees, voluntary recognition of labor unions, increased wages or benefits, and divestment from fossil fuels”.

At the same time, the convention passed Resolution 5: College for All, rolling together the demands of “Cancelling student debt”, “Fully funding public education and making public colleges tuition-free”, “Democratizing higher education”, “Defunding police in schools and universities”, “Fair compensation and decent working conditions for school employees, instructors, student-workers and campus workers”, and “Fighting racism, discrimination, oppression, and racial inequity in schools and universities”. While provisions from this resolution highlighting the Student Debt Relief campaign and pushing the organization towards national lobbying were struck in an amendment, it remains to be seen how these resolutions are implemented by the incoming National Coordinating Committee (NCC).

The Bread and Roses caucus, which has dominated YDSA’s political leadership for years, saw significant setbacks, losing majority control over the NCC. In addition, their resolution at the DSA convention in August, Resolution 32: Strengthening YDSA, failed. Had it passed, DSA would have spent a considerable portion of its budget hiring new staffers for YDSA and paying NCC members stipends.

All together, these decisions suggest YDSA may be moving away from the “student activist” model that it has followed for the past several years. But only time will tell if it is able to orient towards large scale working class solidarity.

Socialism Is Not Liberalism »