In remembrance of Darren Seals, a working-class martyr 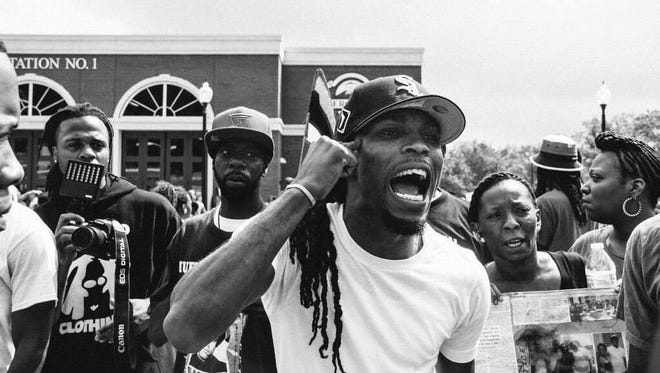 September 6th marked the four-year anniversary of the death of Darren Seals, an activist from Ferguson, Missouri. I first heard about Seals at a time when I was concerned with what I was seeing as the corporatization of activism, particularly with respect to those who were getting book publishing deals and speaking tours but who didn’t seem to be doing anything to politically or socially empower communities as they claimed. This hypocrisy troubled me. A friend, I believe sensing this, referred me to a powerful video by Darren Seals where he spoke to such hypocrisy.

Before I get into why I think Seals has much to tell us about the hypocrisy in question, I’d like to provide some background as to why I’m drawn to him. Above all else, Seals was passionate. Unlike the non-profit organization that waits first to receive funding or be paid to undertake a “progressive” initiative, Seals immediately rose to the occasion in the wake of the police killing of Michael Brown. He was one of the main community organizers at the time, described by St. Louis activist Anthony Shahid as a “frontline soldier” who—whether media was present or not—took to the streets to fight racial injustice and police brutality. He did not have a “brand” or a social media account: he was moved to do what was right by sheer moral impulse. As Seals admitted, “I went out there [to the streets of Ferguson] cuz. . .that was in my heart to do.”

It’s hard to know what the results are when you fight this way. You follow what Noam Chomsky and others have referred to as the “instinct for freedom”, namely the drive to end or overcome oppression, such as brutal use of police force that led to the unnecessary death of Brown. This is what indeed defines true activists. They know that they are up against a system designed to see them fall and perhaps even to eliminate them, a system that—as history has  shown—often has the tools and resources to do so with relative ease. But activists like Seals take the risk because the goals towards which they aim are necessary in order for others, not just themselves, to live a dignified life. And if they are defeated (e.g. murdered by the state) there will be others, inspired by their example, to take up the torch, continuing the same struggle that the system will once again try to snuff out. Activists like Seals do not live their lives for themselves, but for others.

On the other hand, as Seals recognized, hustlers passing as activists see injustice as an “opportunity”: “Let me start an organization, get me a couple grants, start me a couple Go Fund Me’s, tweet a little bit.” After a time, adds Seals, “they’re big shots, they’re travelling the world.” As Seals suggests,  hustlers in activist clothes work within neoliberal logics dictated by capitalism. They integrate and position themselves within the system so as to appear progressive but not threatening, such as DeRay McKesson who, while soliciting private donations, hijacked the Ferguson uprising on social media. They in fact make the system look good by receiving grants from them—corporations, foundations, the state, etc. But once that money dries up, along with the prestige and status of being funded, they’re out of the picture. Technically they could continue to fight for the cause but they wouldn’t have the public visibility that attracts them to activism in the first place. And without that recognition, they don’t see the cause as worth it. Hustlers are after celebrity, not justice.

That’s why Seals called out Black Lives Matter on numerous occasions. In the aforementioned video he says, “People think. . .Black Lives Matter is so clever cuz it’s. . .trending. People don’t know it was an organization, people didn’t know there was. . .real people behind that shit. They just thought it was a saying, like a hashtag. Nah, there’s more to it than just that. This big business, a lot of money in this shit.”

Seals had a legitimate grievance. He saw “actorvists”, including key figures of Black Lives Matter, descend onto Ferguson while sidestepping any effort to join the mass of local protestors already on the ground. Instead of working with them in solidarity, they leveraged the media exposure and energy of the uprising to solicit and obtain funding for nonprofits. There is no evidence that any of that funding went towards helping the people of Ferguson sustain their fight against police brutality, much less social programs and initiatives that had been struggling to stay alive in Ferguson since at least months after Brown’s death. This illuminates not only the opportunism of groups like Black Lives Matter but, more broadly, the non-profit industrial complex, which is about maintaining the status quo behind a patina of a “socially conscious” staff, public relations specialists, websites and press conferences that make the nonprofits seem to be on the side of social change. They are essential in order to keep radicalism within acceptable bounds.

Presently, when so many nonprofits are fighting not only for funding amongst themselves but for the public limelight, as the “answer” or “solution” to the multiple oppressions many needlessly face, we must be  vigilant. In contrast to Seals, what drives hustlers in activist garb is desire for recognition and control over the flow of resources to the activist community. What’s more, they are adept at making the public think otherwise. They know the right language, imagery, slogans, propaganda to employ such that the public—consumed by the spectacle—loses the presence of mind to think about whether they are making a difference at all. In fact, the spectacle can appear so “real” and righteous that anyone who questions them will  be met with personal attacks and hostility. But class-conscious activists seek to unite people across all the existing divisions (race, gender, etc.) that continue to keep popular forces of resistance apart. Radical social change, aimed at ending capitalism, can only be achieved with working-class people—not non-profits—at the vanguard. A robust socialist-based party both advances this cause and better prevents political gains made at the grassroots level from being co-opted by capital.

“You gotta go through some shit to be a leader. You gotta have that pain in your heart,” observed Seals. But that pain is not in the non-profit industrial complex, whose nature and organization is first and foremost corporate. Without feeling that pain, hustlers do what is convenient, including the performances of pain; whatever won’t get them into much trouble and might even get them within the offices of power that they profess to oppose. The person who  feels that pain instead of faking that pain doesn’t sell out this way. That’s how you know what’s real and what isn’t. Pain weighs on activists like Seals but they try not to despair on account of it. It carries and sustains them through the struggle for universal interests (affordable housing, meaningful employment, public education and healthcare, etc.) necessary for the dignity of all.

Conversely, Seals recognized: “the people who don’t live the struggle. . .they don’t understand it. They don’t care about it, they ain’t livin’ it.” This is all the more reason that people suffering under the same material circumstances—whatever their differences—should seek  to unite. They will see just how much they have in common, including the struggle to surmount class oppression. They will grow together and care for each other too. This kind of solidarity and empathy is the foundation for revolution.

Not long after Seals made the video in 2016, he was found murdered in St. Louis. Some have speculated that those whom he attacked in the video are to blame, but we just don’t know who did it. Whoever is responsible still needs to be found and held legally accountable. Til then, we can do justice to the Seals’s memory by remembering these of his last words: “I wanna see the world change for my people cause we the ones suffering.”

Being part of that change, whether you are among the people Seals was talking about, in this case African-Americans, or not, requires that you have a deep respect for that suffering, and that you be willing to listen and work in solidarity with those who give voice to it. While hustlers exploit human suffering and ultimately emulate the oppressor, a true grassroots activist is prepared to share the pain of the people in order to struggle to improve the lives of all.

« When the Culture War Comes for an Abusive Boss

Why do American police forces undermine their own legitimacy? »