Why is it never class struggle when black workers fight back? 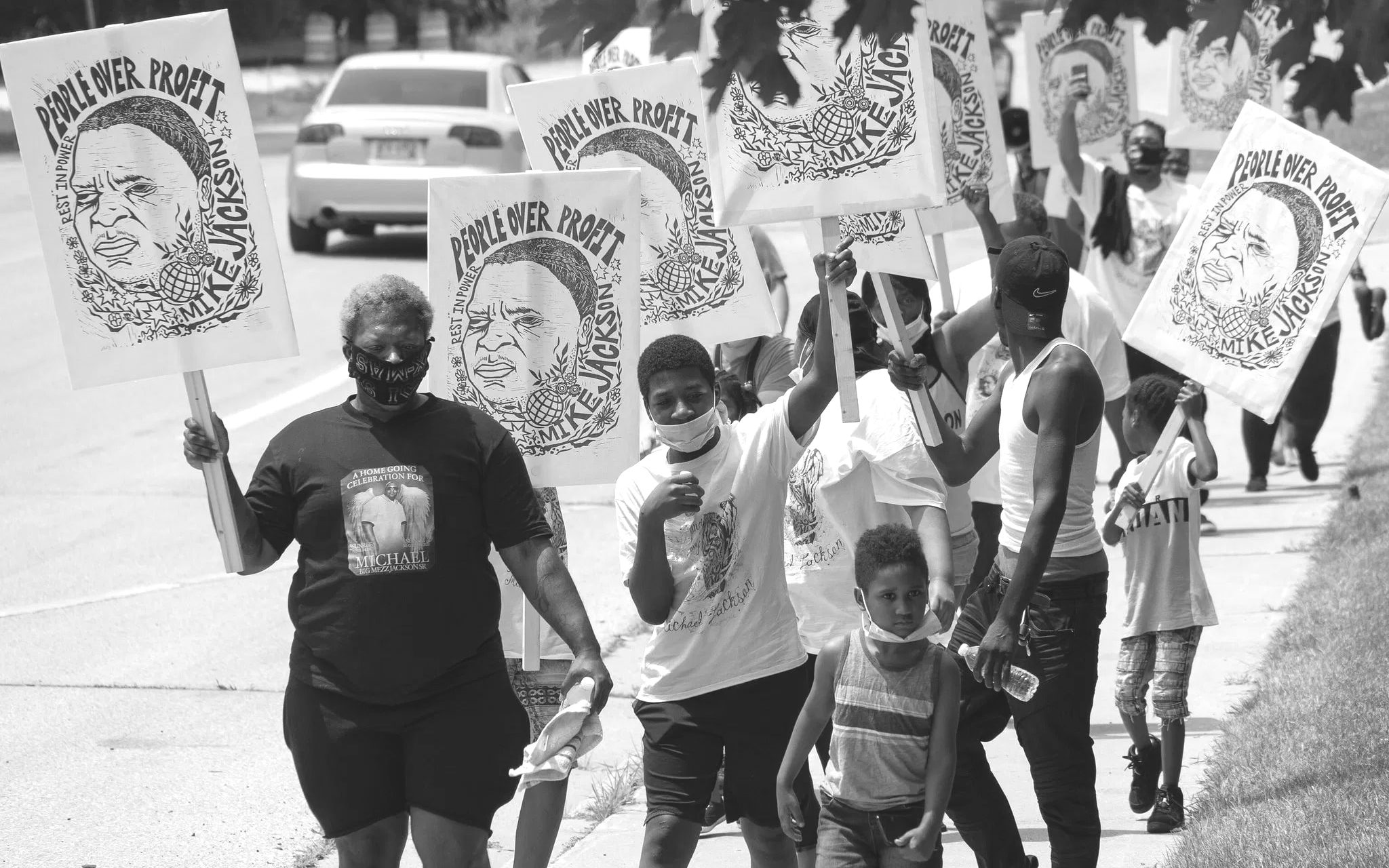 By Chance Zombor. Chance is a union grievance representative at Briggs & Stratton in Wisconsin. This article was originally published at  Organizing Work.

An interesting thing happens when black workers do straight-up class struggle: liberals talk about it as if it’s anti-racism, and anti-racist activists don’t want to have anything to do with it.

A couple days ago, the family of Mike Jackson, a black worker at Briggs & Stratton in Milwaukee who collapsed on the job and later died of COVID-19, marched on the company and picketed with Briggs workers and supporters. About 50 people were chanting, “People over profits!” and “An injury to one is an injury to all!”

In the run-up to the event, organizers reached out numerous times to local activists and factions who’ve been leading marches against racist police violence, but none of them took part in the event or did anything to promote it. And afterward, liberals congratulated workers on social media for fighting against white supremacy.

The race-reductionist compulsion to interpret every manifestation of militancy by black people as explicitly anti-racist, and to view black people as one-dimensional in this regard, is just bizarre.

I mean I get where it’s coming from: Briggs executives are all white, while a majority of Briggs hourly workers in Milwaukee are black. And there are very real, brutal, historical conditions that led to that fact.

But when Mike Jackson led a job action weeks before his death demanding safety, black, white, and Hispanic workers walked off the assembly line with him and shut it down. The next day, the company distributed masks that they had been keeping in storage.

White workers on the assembly line have nothing in common with Briggs executives. They spend the majority of their waking lives working side-by-side with black and Latino workers, sharing all of the same filthy and unsafe conditions, and paying dues to the same embattled business union. The color of their skin won’t spare them from a coronavirus outbreak inside the plant.

Office staff at Briggs, on the other hand, are working from the safety of their own homes during the pandemic, also regardless of their race. Is it disproportionate? Probably. But if the numbers were reflective of the racial makeup of the city of Milwaukee, would the exploitation and abuse of hourly workers be OK? Would it end? No and no.

One of the first people I attempted to organize at Briggs was a young black worker I saw wearing a hoodie with the slogan “Defend Black Women at All Costs” emblazoned on the front. I thought it looked militant, so over time I started cracking jokes with him and asking him about his views on different things, like the union and the news of the day. He’d laugh when I talked about the boss, but then one day he confessed to me that he was conspiring with the boss to “get rid” of a worker on his line who happened to be a black woman. She has since been elected to serve as union steward, and to this day, he doesn’t pay dues.

That’s the difference. Without a class analysis, workers can convince themselves that the real fight is out there in the world somewhere, not right there on the shop floor between themselves and the boss. Race-reductionism is hot right now, but it’s disempowering for black workers.

To be clear, I’m not arguing that we should ignore racism for the sake of building false class unity. The union at Briggs has been very forward about its opposition to racism. Stewards have been instructed to be stern with members accused of racism and to advise them that the union does not tolerate it and is not required to defend it. When every other business union was zeroing in on workplace violence after the shooting at Miller brewery, our union put out a statement condemning both violence and racism. And recently members did a wildcat action in response to racist harassment.

As important as these things are, as workers, we have to struggle for the primacy of class in our movement.

As a union leader, I’ve been approached by journalists and leftist bloggers who want to tie Mike Jackson’s death to BLM. I’ve been asked to campaign for my Local to cosign the agenda of liberal nonprofit organizations. And I’ve had activist managers ask me to speak publicly as a “white ally” instead of as an affected worker (despite my racial ambiguity).

There’s a real temptation to try to piggyback on the success of the Movement for Black Lives, and a lot of pressure to avoid talking about class when the workers involved are mostly black. But ultimately, class struggle is class struggle, even when it’s being waged by mostly black workers.

There’s a special kind of pandering that goes on on the left. It’s like a bait and switch tactic where white leftists try to manipulate black workers into fighting against capitalism by convincing them that racism and capitalism are one and the same. And they’re so committed to this tactic that when class struggle happens in a majority black shop, the left’s first impulse is to redirect black workers’ efforts toward a more acceptable starting point: anti-racist activism.

Incidentally, when they’re put on the spot, anti-racist activists and academics often use this same reasoning to avoid class struggle by claiming the work they do is already anti-capitalist in nature.

But for workers, power resides at the point of production, not in the demands of foundation-funded nonprofits. Mike Jackson and his fellow workers at Briggs leveraged that power to win one of the demands they needed to improve their immediate working conditions by shutting down one assembly line for as long as it took to confront the boss. A radical, militant labor movement can use it to make sweeping societal changes by shutting down whole sectors of the economy.

« Racism and Responsibilization in “White Fragility”