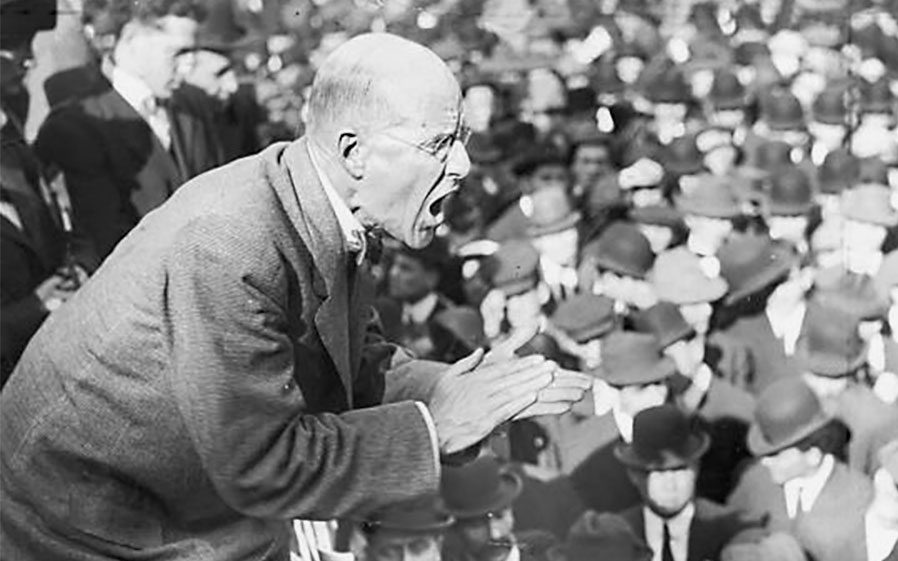 The DSA’s biennial national convention, the organization’s highest governing body, has just concluded in Atlanta. We may rejoice in the fact that this was the largest gathering of socialists in this country since at least the heyday of the Communist Party in the 1930s, and perhaps of all time. We should also be pleased with the passage of a pair of substantive labor proposals, resolutions 3 (“Towards a Clear, Multifaceted Strategy for Labor,” introduced by the Collective Power Network) and 32 (“Labor Strategy and the DSLC,” introduced by Bread & Roses), and with the vigorous and principled debate that preceded that passage and that demonstrated the potential of the DSA to be a serious political actor.

Unfortunately, the labor debate was a bright spot in an otherwise disappointing convention. In political terms the organization has stagnated or moved to the right on a host of issues since the last convention in 2017. This is most apparent in the failure of the candidate litmus test resolution 48, in the passage of the deeply concerning antifascist working group resolution 9, and in the composition of the newly-elected National Political Committee, which features a reduced and less ideologically rigorous post-Trotskyist “left” and a reinforced (though thankfully still minoritary) anarcho-liberal right.

Worrying signs began early as the opening speaker, a DSA-endorsed local politician, revealed himself to be a landlord, complained about his tenant being “crazy” and behind on rent, and encouraged the delegates to vote for liberals instead of just socialists. Following that inauspicious start, the convention was marred by a barrage of ludicrous behavior and procedural obstructionism that, taken together, bode very poorly for the ability of the DSA’s internal culture to halt further rightward drift. It is this point that we will address in this article; a more detailed analysis of the political results of the convention will be forthcoming.

The demise of “normie socialism”

The 2019 convention was the first exposure many delegates and observers will have had to the DSA’s embrace of liberal activist-subcultural practices such as clapping bans, the progressive stack, language policing, mandatory pronoun disclosure, “hug rooms,” and the constant weaponization of claims of disability, often invisible and unverifiable, to score political points or otherwise gum up proceedings. For many others, this phenomenon will have been all too familiar. The reality is that these behaviors and practices, while clearly corrosive to principled debate and alienating to the average member of the American working class, have been sweeping the DSA one chapter at a time since the organization’s transformation in 2016 and 2017.

A few examples will suffice for readers unfamiliar with the extent of the problem. In what has quickly become the most famous scene from the convention, a man interrupts proceedings to berate the thousand-odd convention delegates crammed into a single auditorium for causing him “sensory overload” with all their “whispering and chattering.” As the chair attempts to return to convention business, she is immediately interrupted by another frivolous point of personal privilege taking issue with the “gendered language” employed by the preceding speaker (the language in question was the gender-neutral colloquialism “guys”). On another occasion, a woman hijacks the convention for several minutes to demand and deliver a “land acknowledgment” largely consisting of biographical trivia about herself, admitting that she does not know and has not bothered to research the names of the Native American tribes that had once lived in Atlanta. The leader of the convention’s marshaling team delivers a speech in which he prohibits not only those familiar enemies of the working class, clapping and “hissing,” but also the waving of banners and entry into the convention’s designated quiet rooms by individuals “with an aggressive scent.” An individual grabs the microphone and claims to be undergoing a clapping-induced seizure at that very moment – a physician in attendance privately confirmed that her undergoing a seizure while lucidly standing and speaking was medically impossible. At another point, an attendee rises to a point of personal privilege to demand, with considerable disregard for Robert’s Rules, that men not be permitted to call the question on motions that primarily affect “femme female-identifying non-men folks.” A caucus displeased that the length of lines to speak “for” or “against” the resolutions indicated to the audience that their positions were unpopular uses coordinated ableism trolling to cap the lines at six apiece. Interspersed amidst all this, an interminable number of white men interrupt the proceedings to performatively announce that white men should stop talking so much. These antics and others like them delayed proceedings by hours and prevented any substantive debating or votes from occurring on the first day of the convention.

It is important to note that the supposed “community agreements” at play in the above examples were never voted on by the convention delegates: it’s unclear if they were imposed by the convention rules committee or if they had no formal standing at all. While this sort of behavior has long been a feature of the American left, which has been for some time the domain of cranks and campus “radicals,” it is a new and unwelcome phenomenon within the DSA – not to mention a betrayal of those key premises of the Bernie Sanders campaign that breathed new life into the organization. The unsettling reality is that the DSA’s rapid membership growth since 2016 has not resulted in its evolution into a precursor to a mass workers’ party along the lines of the Socialist Party of America, but rather into something more closely resembling campus-adjacent failures like the SDS or the ISO. Any such organization runs the risk that its lack of an organic connection to the working class will leave it vulnerable to capture by the interests and ideologies of the professional-managerial stratum, and the conquest of the national convention by activist-subcultural behaviors indicates that this is already well underway. If we are to reverse this process and set the DSA once more on the path of working class politics, we need to be very clear about what is happening within the organization and why it is dangerous.

No party for the working class

That these eruptions were a constant nuisance and impediment to substantive debate throughout the convention is clear. It is also clear that they have had a negative impact on the DSA’s reputation since going viral on social media. We need to engage in serious introspection about what this sort of behavior looks like to the average working person. While these are real concerns, however, bad press emanating from the convention is far from the extent of the problem.

The key concern here is that the convention’s descent into farce is not the exception to the rule of an otherwise well-functioning organization: it is representative of precisely how hegemonic the obsession with liberal cultural affectation masquerading as politics has become in the DSA. While a few major chapters have been able to resist some of these practices and the anti-working class ideology underpinning them, the organization as a whole and its coastal urban heartlands in particular seem helpless in the face of them.

Radical liberal subculturalism is dangerous to the integrity of an avowedly socialist movement in two primary respects. Most straightforwardly, it alienates those members of the working class (and indeed the middle class) who are not initiated into the latest discursive fads emanating from elite universities and the liberal nonprofit complex. Given that the DSA’s membership was never particularly working class in character in the first place, the slightest disequilibrium in this respect can lead rapidly to a vicious cycle whereby subculturalism drives off working people, thereby reinforcing middle class activist domination of the chapter, which in turn emboldens the more aggressive subculturalists, who in turn drive off more working class people.

By way of example one need only look to cities like Pittsburgh, where a thriving DSA chapter that once elected four socialists and regularly saw well over a hundred people attend its general meetings has been systematically destroyed by a new steering committee enamored of this form of liberal antipolitics. The most recent Pittsburgh general meeting had a few dozen attendees and the chapter is moribund: a major chapter undermined and destroyed within a matter of months. The same fate awaits other chapters outside of the very narrow band of highly gentrified coastal metropoles where the professional-managerial stratum constitutes a large enough share of the population to sustain a DSA chapter on its own.

The ideology of another class

The fact that these practices alienate regular working people and drive them from the organization would be bad enough on its own. What is most dangerous of all, however, is the nature of the liberal ideology that underlies these practices. This ideology goes by many names, the most common of which is identity politics, and it constitutes a neoliberal alternative to a left. Identity politics and its corollaries, including standpoint epistemology, privilege theory, and intersectionality, are corrosive to class solidarity and incompatible with socialism. Not only are they anti-Marxist, they are ultimately ineffective as paths towards liberation of any sort. In spite of this, this complex of liberal ideologies has been enthusiastically embraced by many who earnestly believe themselves to be socialists.

In order to preempt the standard response from identitarians to criticism of their politics, we must clarify that identity politics is not a simple synonym for any politics seeking to improve the quality of life of members of minority groups or women: Marxists have been on the front lines of fights for the liberation of all oppressed workers from the very beginning, from women’s suffrage to ending Jim Crow to combating anti-Jewish pogroms in Russia. The journalist David Berreby’s three-part definition of identity politics better suits our purposes:

This formula for doing identity politics is notable for its ability to implicitly erase class distinctions between members of the same identity group, and to apply to nearly any characteristic according to which people may identify themselves, no matter how far removed from any material ramifications. Consequently it has become an irresistible magnet for both individual narcissists to valorize their personality problems as indicators of revolutionary heroism, and a temptation for well-adjusted but ambitious members of the educated strata to claim diplomatic immunity in argument and social cachet in leftist circles as spokespeople for the marginalized. In an atmosphere dominated by these discursive practices, one can hardly expect substantive debate to be possible. And since class is not an identity, and when treated as an identity within the framework of neoliberal intersectionality always just so happens to carry no particular weight, the inevitable result is to stack the deck in favor of liberal or idealist politics and against socialism and materialism.

Unlike identity, class status does indeed unite people of vastly different backgrounds and cultures in their common material relationship to the means of production. A socialist movement that does not emphasize and re-emphasize the primacy of class in understanding all struggles cannot be expected to make progress in the class struggle: its politics will drift inexorably towards liberalism, as we are currently witnessing in the DSA.

If you find yourself agreeing with some or all of the opinions expressed in this article, please consider joining Class Unity.

The Siren Song of Anti-Class Politics »